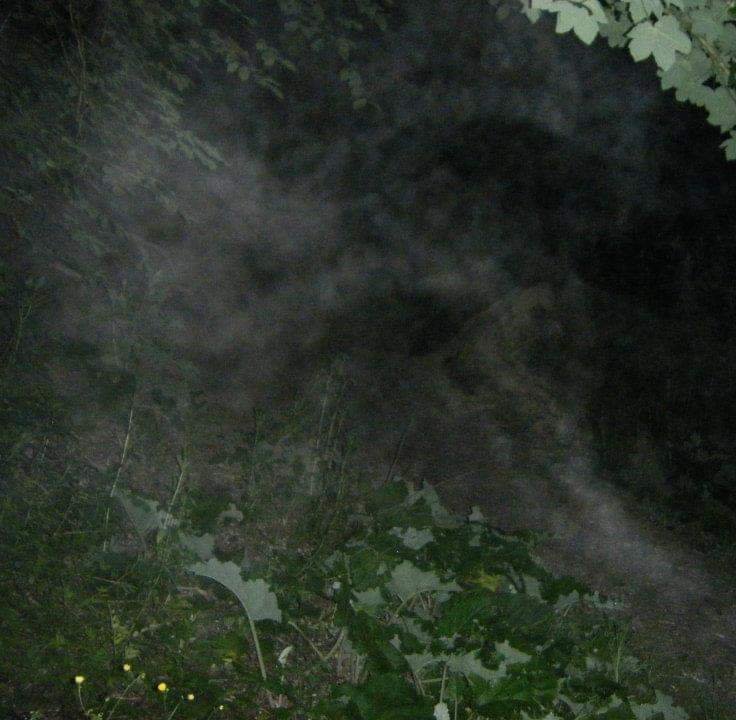 We arrived at Arundel Castle late evening on a warm night; we parked up halfway down the drive on the right hand side of the castle. We set up our camera's and note pads ready. As this was our first hunt we decided we wouldn't take too much luggage with us. The air was still and you could hear birds singing in the tree's, there were a few people walking around, walking their dogs or just on their way home. We walked for 15 minutes bearing right on the castle outside of the castle walls. We came across a small bridge at which we past underneath, where there was a small stream flowing through. It was a little dark and damp and so i took a couple of pictures. We approached the other side of the bridge and came off the road into a public path and a forest of tree's which cover the back of the castle walls. We called out if anyone is there then please let yourself be known to us, or can you make a sound for us. At which point we heard a sounds that could not be described or could be put to any of our surroundings. We then came across a little derelict hut which opens onto the lake that we were passing; I took some more pictures of our journey and of the hut. Nikki walked ahead of me and as I turned around I see a blue shape shaped figure, I could not see anything around that would reflect on what I saw. I then informed Nikki that i'd just seen something, at which point she asked if it was a blue like figure. We walked on and Nikki called out some more, Nikki then turned to me and said she had seen blue coloured trousers, but vanished almost instantly. We both felt very short breath through most of the journey through the outskirts of the castle. As we was on our way back to the car there was an old building that looked like someone was inside which could not of been the case as the building was closed down, it looked as if someone was standing at the window. I have done a video of the old building plus some other videos of our journey, I also took a lot of photos, which I have scanned and can not see anything in them. Nikki had her dog Jacko with her on our walk round the castle, the dog started barking at fin air which we found strange but again it's unexplained.

We want hard evidence and feel that we will come back to inspect the Arundel Castle at a latter date. We are happy with our findings as this seemed to be good for our first hunt.